I competed in my first tournament in the Adult Division (ages 18-34) at the Unity Championship in Connecticut USA.  I was really looking forward to seeing how I would do since it was going to be a whole new group of competitors for me.

I love going on road trips for tournaments since I get to see new places, meet new friends and see old friends.  Before competitions I always follow my set routine.  The night before I always find a conference room in the hotel and have a really good stretch after a long drive, go through my patterns, loosen up with some footwork and finish off with my special and top secret pre-tournament rituals 😉  It doesn’t matter if it’s a friendship tournament or a World Championship.  I still like my routine 🙂  I guess you could call me a little OCD.

27 Canadian competitors went to the tournament and of the 27,  7 of them were on Team Canada.

In patterns I won gold.  I was more excited to get helpful feedback from the Masters and other Instructors.  For me, the most important part of a tournament is coming away with more things to tweak and improve on. It was also exciting to compete against an American for my first round, who I met in Spain. 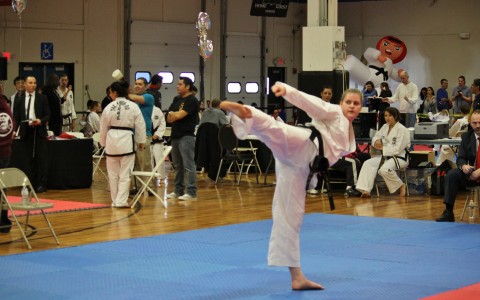 I got gold in sparring too. I’ve been working really hard on sparring footwork and a few new counter attack drills.  I had been doing them so many times that they actually went into my muscle memory and when I tried them during my matches, even I was a bit surprised how well they worked 🙂   I had only been doing drills,  so it was nice to actually use them in a real situation. After the competition two of the women in my division who I’ve never met before said that they want to come train with me so I took that as a huge compliment.

I’m in the red sparring gear 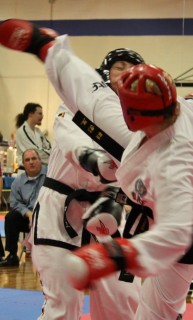 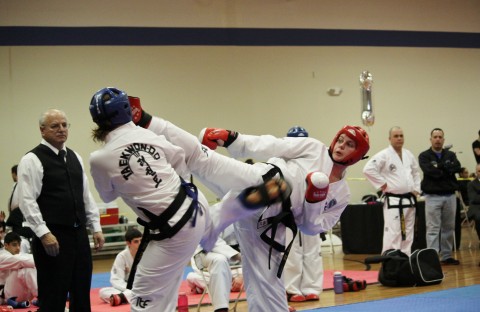 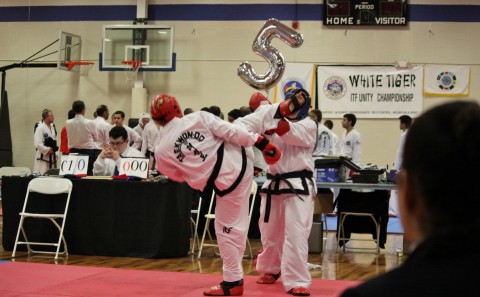 It’s been suggested to me by several competitors  who I really respect that I should consider dropping weight and compete in the Heavy weight division instead of the Hyper weight.  They say I’m fast enough and flexible enough to compete with the Heavy weights but as an adult in the World Championships in the with hyper weights I will be too short and no matter how good I am, if my opponent is much taller with a longer reach I will get into trouble.  This is something that I have to think about and decide about before Nationals.

There was an exhibition Showcase Sparring Match between two male World Champions Julio Cesar Carlos from the US and Maxime Bujold from Canada.  The advertising promoted a lot of hype and excitement for the tournament.  I’ve trained with both of them so I knew it was going to be an exciting event!

I was surprised but honoured when I was asked to be a judge for the event with 3 gentleman.  Two judges from Canada and two from the States.  I felt bad that I was not in my judging uniform but I was competing immediately after the match.

White Tiger TKD was the host the tournament and they did a great job.  There were lots of judges to keep the 6 rings running smoothly and on time. Thank you so much for such a great experience and such wonderful hospitality!

All in all, I was very pleased with the weekend and I look forward to more experiences and more learning. 🙂 It was a great way to start the year off and begin competition season in the adult division!

To view 200 pictures from the Exhibition Match, the Chon-ji Challenge and other competitors click on the image below