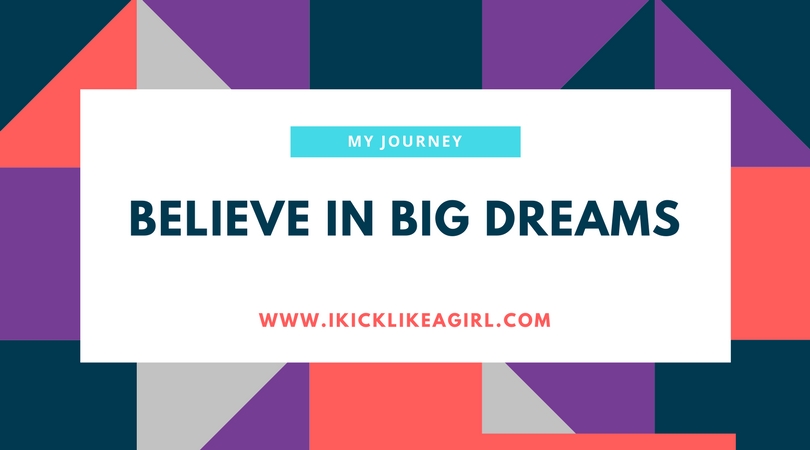 What a great experience!!!!  Getting together with old friends and making new ones is a huge part of Taekwon-Do tournaments.  I was especially excited for these Pan Am’s since I knew would see some people that I competed against in New Zealand at the last World Championships.  The only disappointment was that they have all moved into the adult division and I’m STILL a junior  so I couldn’t compete with them.  I’m always too young! 🙁

The weigh-ins on Friday night are always fun since you see everyone for the first time.  Nerves are usually running quite high so everyone reacts differently.  Some are talkative and some are very serious and quiet since they are getting in their competing head space.  Fortunately for me I never have to worry about ‘making weight’ since I’m a hyper-weight but there is always a lot of drama around people having to lose weight during the last week by fasting and doing crazy things in order to make weight.  Then they slowly have to introduce the ‘right’ foods into their system so they gain their strength back without upsetting their stomachs. 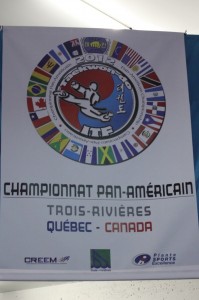 Saturday was great since it was for coloured belts and adult black belts.  That meant that I could spend the entire day focused on the students that I have been coaching for the last winter.  I was sooooo proud of them.  They all medaled but more importantly they all showed their ‘Indomitable Spirit’ throughout their day.  They showed great sportsmanship and never gave up.  I think I now know what a parent must feel like when their kids do well 🙂 They all performed really well, and I was impressed with how they dealt with the bigger and more professional environment.  I was also a judge for the adult black belts in the afternoon.  I was really pumped after watching the adult black belts compete too. They are awesome!!!  You really have to look through all the pictures that my mom took to get an idea of how good everything was 🙂

After 11 long hours in the arena I just wanted to have a quick pasta dinner and then get myself ready to compete the next day.  I need my alone time before I compete.  My friend Alex Matta and I found an open field where we could just spend quiet time going through our patterns.  We did patterns until it was too dark to see but I felt better going to bed having done them.  I also did some yoga which really calmed my nerves and got rid of any aches from the long day at the arena.  I don’t go anywhere without my yoga mat.

Sunday started early and I had huge butterflies in my stomach.  I’ve been working really hard learning my new 3rd degree patterns and working extra hard with my fitness and different sparring techniques.  I wanted the opportunity to try everything out.  It’s funny, I feel more pressure now to compete well since I never want to lose the respect of my peers and instructors if I don’t do well in competition.  I also don’t want to let myself down after all my hard work.

For patterns I felt really strong and just wanted to keep doing them!  For sparring I was really excited to meet three new Canadian hyper-weights that were really good.  I kept thinking of the great National team we will have going to Spain.

Then we had team sparring and I was hooked up with 2 of the girls that I just competed against in individual sparring plus another girl from Quebec.  It’s so weird how one minute you are competing against someone for individual events and then right after you are best friends cheering each other on while being on the  same team for team sparring  🙂

The awards banquet Sunday night was amazing!!!!!!!!!  The banquet hall was so perfect and had a real party atmosphere.  The food was great and everyone had such a good time.  It felt nice to get all dressed up and receive our medals in front of everyone.  Unfortunately since so many people had to either catch their flight or drive home, not everyone was there but they got their medals at the tournament. 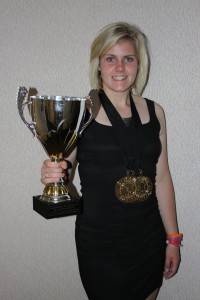 I was so proud to win Gold in 3rd Degree Patterns, Gold in Individual Sparring, Gold in Team Sparring and Overall Best Junior Female Athlete!

I would like to thank my mom taking 1,000’s of pictures during the weekend.  Click here to view all the photos of all competitors.

Here is just a sample of all the photos that she took.  Enjoy 🙂