Today was the highlight of the trip!  My family and I went on a seal safari.  We drove in a Land Rover with 6 other tourists and we drove up to the highest point of the Island. We were driving straight up cliffs on tiny narrow roads.  We were exactly on the fault line so if there had been one little tremor I would hate to think of what could have happened.  The views were spectacular!!!!!

I’ve never seen such high mountains and low valleys.  We even saw wild horses, goats, wild pigs, lots of birds and deer.  We drove by a huge wind farm with 65 wind mills that stood 100m high and had blades that were 60m long.

After we reached the top we knew we had to come down.  The road was in a zig-zag pattern. 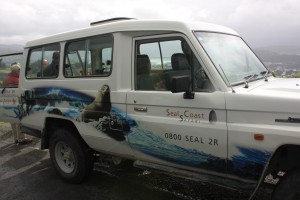 It was way too step to go down straight.  The dirt road was full of pot holes and boulders that had fallen down the mountain.  We were bounced around and one guy hit his head hard on the ceiling.  We kept shifting our weight when some of the road was really steep and close to a cliff.  My mom was so nervous and she hates heights so she was freaking out.  Once we got to the bottom we were on the isolated shore. It wasn’t a sandy beach, it was actually fine gray crushed volcanic rock and it was really deep.  The landrover sank about a foot with all our weight.  The driver had to keep checking with his binoculars to see if the roads ahead were washed out and to see where the tides were to know whether it was safe to continue.  I kept wondering what would happen if we got stuck in the sand and I couldn’t get back to the hotel on time for my team meeting. 🙂

Once we reached our final destination we saw so many seals.  These were Australian Fur Seals. They were all just laying on the gravel and they blended right in with the colour of rocks.  The huge wave kept crashing against the rocks so water was spraying everywhere.  You could get really close to seals and they had the cutest eyes I’ve ever seen.  One seal snarled at Greg and scared him because he didn’t even know he was there since he was camouflaged so well.

Our driver was amazing and he told funny stories for the whole trip.

The weather was raining and freezing cold.  Before we turned around the driver pulled out a little picnic for us all.  He had the best muffins ever and offered tea or coffee from his flask.  Then he did something very weird.  He offered us Manuka tea.  Basically he picked some branches from a manuka tree and put some twigs in hot water.  He claimed it cleansed the body and was an antioxidant.  He said he had to bless the manuka with the spirits and then went through a whole prayer/chant to the ‘gods’.  Once he was done we had to accept the offering and blessing.  I know it was all a hoax but it was fun to go along with it anyway.  The tea smelt really nice but I thought it tasted like swamp water so I poured mine out when he wasn’t looking but everyone else said they loved it.  After we finished the tea we rubbed our hands with the wet twigs as a sanitizer.  Apparently this manuka is good for everything. 🙂

Then it was time to get back.  The whole trip took about 3 ½ hours and it was incredible.  I have to admit I was scared several times but it was worth seeing such beautiful landscape and deserted beaches.  I just wish the sun had been out so the views could have been clearer.

When we entered into the hotel lobby all the team delegation was there.  It was a cool feeling walking into the lobby and seeing all my friends.  It hit me… ‘wow, this is it’.  My family holiday came to a complete halt and now it was game time.  I’m so glad that we had the few days together to get settled, relax, see some cool stuff and get used to the time and weather change.  We had a team meeting with the expectations of the coaches, the curfews, the rules and training schedule.  I can’t wait to train in the arena tomorrow.

Tomorrow is the weigh-ins, and this is where all the team bonding is happening. There are many athletes that have to cut weight so we are all cheering each other on while they’re running or spending some time in the sauna.  It actually felt really cool. I didn’t expect to feel something but when we were all together even though we don’t know each other that well, we unified and were finally becoming a true team. I was supporting my buddy by cycling while she was on the treadmill.  Some of them aren’t looking too good since they haven’t eaten in a while.  As soon as the weigh is over they can nourish themselves again.  This is when I’m so happy that I don’t have to worry about making my weight.

This is amazing guys and tomorrow is another long day. I will keep you posted.

Now I have to eat all my meals with the team and we had a nice buffet dinner while Greg and my parents went to eat on their own.  I’m glad that I’m still allowed to share a room with Greg.  I’m really having fun with him.  That’s it for now.

7 thoughts on “The Canadian Delegation Arrived”