I was really sad that this was the last day of completion.  I’ve basically been consumed with this event since I left New Zealand at the last World Championship.  I thought that I would only do one but once you’ve done one, you keep wanting to do more and more of them.  Each time it gets better not only because your own skill improves (hopefully) but because you feel more and more a part of this amazing community of competitors.  It’s so rare to be with so many people that understand you and share the same passion.  I have the best friends in the world outside of TKD but I’m sure they think I’m crazy to go through all the training etc.  I have had so much fun this week and I just don’t want it to be over.

My final event was team Special Techniques.  It was the first time I’ve competed in this event at a World Championships.  I had to perform the flying side kick.  I trained really hard for this and was excited to see how I would do under the pressure.  My other two team mates had to perform a flying high kick and flying turning kick.  I was so happy that I easily made it over my target since I was a bit worried about getting enough explosive power with my sore ankle, let alone kicking the target with that foot once I did get over the bar.  We were sitting in the bronze position for most of the day until the last team from Argentina went and bumped us out of the medals. It was such a long day since there were so many teams involved and we didn’t know if we were going to have to do another round or if we were going to be eliminated based on another teams performance.  I was just so happy that we did as well as we did and it made me realize that I want to try to qualify for this event again next time for individuals as well as team.  Who would have thought that a hyper weight could jump so high?  I was thankful that Ms. Merritt (National Coach for Special Techniques and Power Breaking) convinced me to try out for this event.  Since she lives so far away I kept sending her pictures of my form during my training and she would critique it.

I love how all the competitors gather on the floor at the end of the competition for the last few medal ceremonies.  It’s when everyone is relaxed and all the countries really come together.  Lots of exchanging of doboks, track suits, souvenirs etc went on and everyone takes lots of pictures.

Here is a summary of Canada’s Medalists: 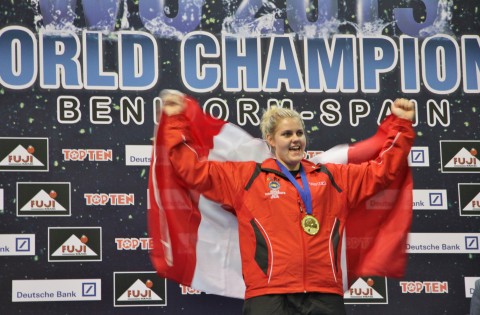 CLICK HERE TO VIEW ANOTHER 200 PICTURES OF THE DAY