I forgot how incredible if feels to compete.  Even though it was not a sanctioned tournament I had a lot to prove to myself.

I was also excited that so many different Masters were going to be there as well as my senior instructors from all over Ontario, Quebec, California, New York and Connecticut.  My original instructor of 10 years (Master Kou) was there and he hadn’t seen me compete since I was 12 years old. When I looked around the room I saw so many competitors who were on the 2011 National Team, the National Coaches and  Team Manager.  I really wanted to show them that I have been working hard.

I spent the morning judging and coaching all the coloured belts from our dojang. 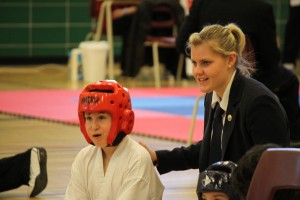 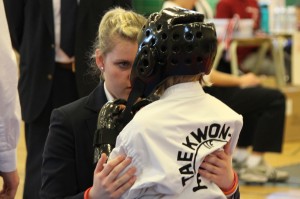 Because I’ve been working weekly with the junior students in their ‘tournament training’ it was easier connecting with them and helping them out if things were’t going their way or if they got hurt. 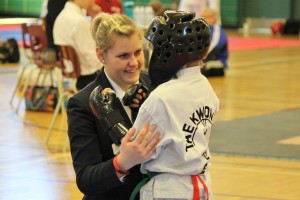 Suddenly after a little ‘pep’ talk….everything is o.k. again 🙂  It was nice to see them all progress so much since the last tournament. 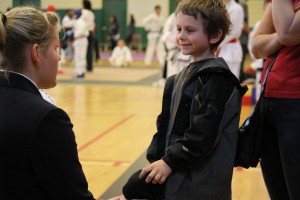 Fritz (another one of the kids I coach) couldn’t compete today since he hurt his knee but he still came to cheer me on which was so sweet. 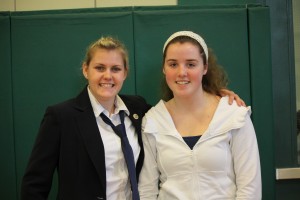 My friend Kelsey came to watch which was also special.  None of my other friends from school have ever seen me compete so I was kinda worried that she wouldn’t like it or understand it.  I can’t believe she spent the entire day there and it was her 16th birthday! 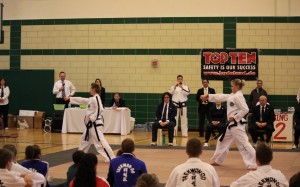 I was so pleased to make it into the finals for the fun Chon-Ji Competition.  This round robin series has all the black belts competing against each other performing Chon-ji which is the very first pattern you learn when you start Taekwon-Do. I ended up in the finals with Isabelle Bond the Women’s World Champion at the 2011 World Championships.  Obviously she won but I was just excited to make it that far to do a pattern with her :).

Then the real tournament started….

Since there weren’t any other Junior 3rd degrees for me to compete against they put me in the adult division for both patterns and sparring.  I knew it was going to be a huge challenge but it was the best way to practice what I’ve been working on. I literally learned my three 3rd degree patterns in a few weeks. 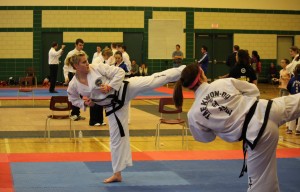 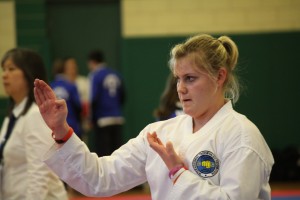 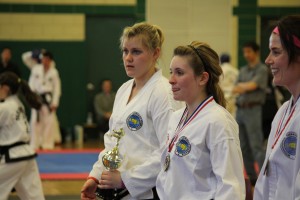 I took a risk and chose to do all three different 3rd degree patterns for my pattern of choice. I  wanted to show the judges that I could do all them and I wanted to know which pattern I felt more confident doing in a tournament environment. I just figured I had nothing to lose and wanted to prepare myself for the sanctioned tournaments.  I had never competed against any of these women  let alone as a third degree so I had no idea what to expect.  I was surprised and happy to win first place against such skilled competitors. 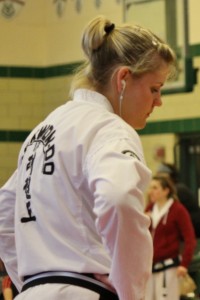 Then it was time to shift gears and warm up for sparring. Listening to music is my way of getting into the ‘zone’.  I listen to different music for pattern preparation than I do for sparring preparation.  It’s important to be able to change your mind-set between the two events in a short period of time. 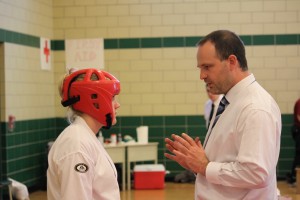 I have to admit I was both excited and nervous.  I’d never seen my first competitor before from New York so I had no idea what to expect. 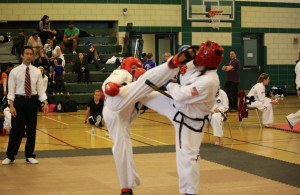 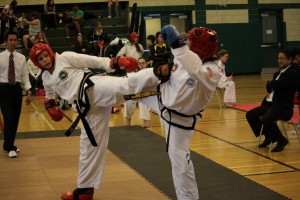 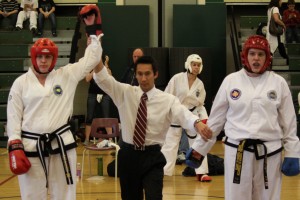 I was trying all the new drills and combinations that I have been practicing and I felt like my ring management and speed had improved. 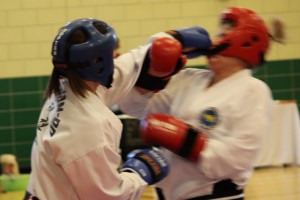 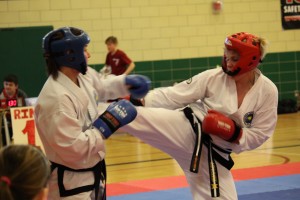 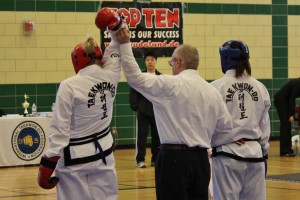 It was a hard battle with Mrs. Cabanas.  She is so skilled and strong and  I really like training with her. It’s interesting sparring friends or competing against friends. Outside the ring, you remain friends, in the ring it’s business and then after it’s back to being friends. It’s nothing personal. 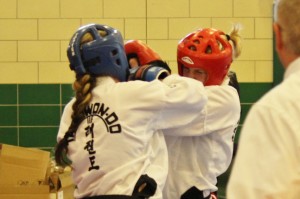 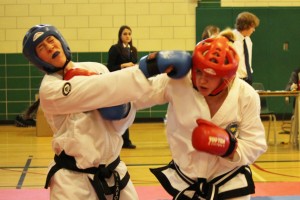 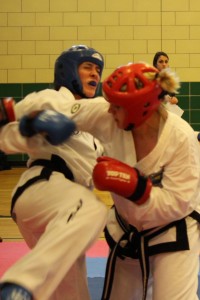 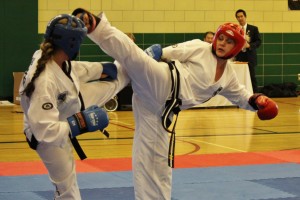 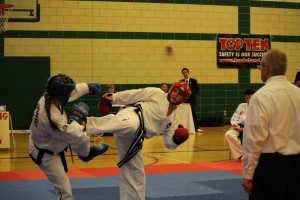 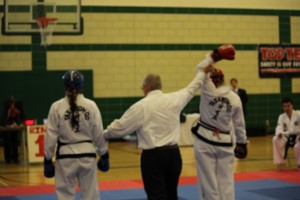 By my final match for the gold I was getting really tired and pretty sore but there was no way I was stopping at this point.  This is when the mental toughness had to kick in! I had never seen this competitor before and that suprised me since she was really good. 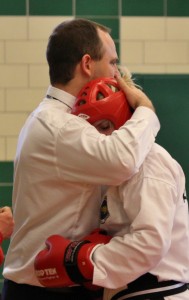 Mr. LeGrow was awesome.  He coached me for  every round and it made me feel ‘safe’ since he knows what I can and can’t do.  At this point I was just ‘done’ 🙂  It was a looooong day! Mr. LeGrow was really there for me and it meant a lot to have him right there behind me. 🙂 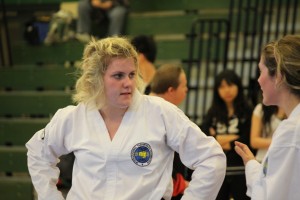 Don’t worry, I cleaned up well before the dinner banquet 🙂 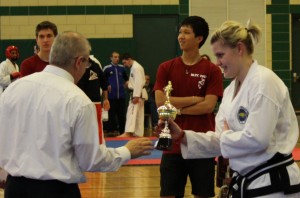 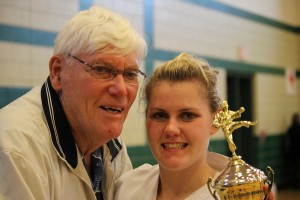 It always great to have Grandpa there cheering me on.  I’ll share my double golds with him 🙂

I think one of the highlights for me was the feedback I got from Senior Instructors.  Their constructive critism gives me more to work on.  I appreciate the fact that they took the time to point things out to me since they want to help me and see me improve.   I value their comments and will work on what they said.  The other highlight was seeing all my friends from everywhere.  I really miss them between training seminars and tournaments.  Can’t wait to see everyone again soon.