Right after the academic award ceremony at school I jumped on the Voyageur bus to Montreal for the weekend.  I always LOVE going to Montreal.  It’s amazing seeing TKD friends. 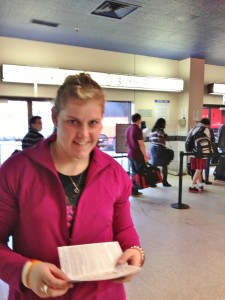 Saturday morning I went to watch the Coupe du Quebec.  I would have loved to compete but this is their Provincial championships and also my foot still isn’t in good enough shape to train yet.  The selection cycle is starting again for the National Team so I always like to see who is competing and who is doing really well.  With TKD there are always new competitors coming up the ranks with their tests and competing categories – especially in the Junior division.

I had planned on just being a spectator but I ended up being a judge for the black belt divisions. Mr. LeGrow and Mr. Lim also came from Ontario and they judged as well.  I never go to a large tournament without my judging suit. Even though we didn’t compete in the Quebec Provincials I was glad that Ontario was still there in representation.  It allows the competing black belts to focus on their own competition and not worry about judging.  The higher your degree the more you judge.  I am qualified to judge up to 2nd degree black belts and I have been a centre referee.  I get re-certified as a judge whenever there is a course.  It’s so important to know all the current changes, rules and hand signals.

After the tournament I had a blast with everyone at our dinner out.  One of the best parts of TKD is the friendship that we have together.  We are all ages, all belt levels and degrees and it doesn’t matter what school you train with.

I enjoyed getting to talk to all the Quebec Instructors and Masters about upcoming events and tournaments.  It’s going to be an awesome year!  I was really happy that a few people even commented that my french was getting better.  Being in French immersion was the best thing I ever did since most of my training buddies (in TKD and even with my track & field) are french and it just makes it easier for everyone if I can speak french with them too.

Congratulations everyone on a great tournament!