We went on the team bus to Pickering on Saturday for a game against the team that we tied last week.  Unfortunately it wasn’t in the cards for us that day.  We had a terrible first half!  I’m not really sure what happened to us.  I think the other team was so determined to win after last week and they came out stronger.  It’s true when they say ‘you have to want it more’.

Coach Kwame had a really good half time talk and lit the fire under us.  We came back in the second half the team that I know we can be.  If we only had 10 more minutes 🙂  The game ended in a 2-1 loss.    So close but so far. 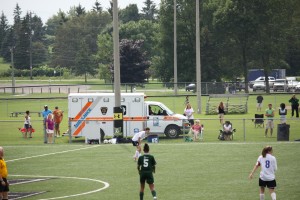 The game was really rough.  One girl on the other team went off in an ambulance and there were a couple yellow cards given out.  Cards are risky this late in the season since we need all our palyers of the last few games so we don’t want anyone to get a suspension. 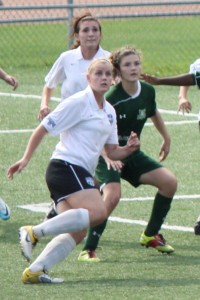 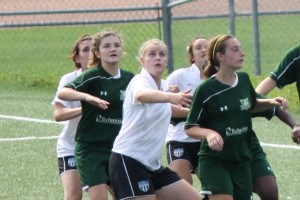 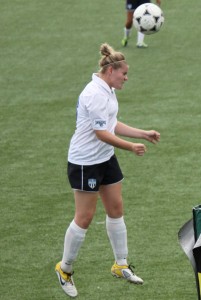 Travelling on the bus is always a good time.  It was a 5 hour drive each way so it was a long day.

Sunday 2 other girls and  I were called up by the older team to play for them in Oshawa so the next morning we drove to Belleville with the other team.

We ended up driving 20 hours in two days for 2 games!!! I had my rolling pin in my bag to keep rubbing out the leg cramps.  I absolutely loved palying with the older team.  It’s a different kind of pressure.  You don’t really know each other that well and don’t know how each other plays and you don’t want to let them down either.  It was a really important game for them so I was happy that they asked me to go with them.  It was especially fun since I got to play with two of my team mates as well.  The day was very sucessful and we came home with a 5-2 win.

Our team has been practicing as much as we can.  Our regualr practices went really well  and I also got together with some team mates and other guys that love soccer as much as I do just for more time with the ball.  Kwame is trying to get extra exhibition games for more practice to get ready for the last three games.  It’s all up to us now. We win together and we lose together!

My soccer schedule really didn’t work with my TKD schedule so I ended up training at a Trigger’s TKD since it’s around the corner.  I love soccer but I can’t go too long without TKD or I get a little crazy.  I have a kicking shield so I can practice some kicks on my own as well.  I don’t think you will ever take TKD out of my system.  I’m just so glad it’s something that I can do the rest of my life at any level or intensity that I want.