I was not happy when my alarm went off at 6:00am but I knew I had to get to the training on time.

I was excited since I was going to have my first spinning class instructed by Ms. Bond and I knew it was going to be a challenge. I’ve never seen a woman in better shape than her.  After a quick group warm up we headed up to a private spinning room.  The room was quite small so we were very close together and you could really feel the energy.

The bikes were all close together, the music was really loud and the coaches were all on fire cheering us on.  You could feel everyone’s adrenaline pumping.  It was awesome and the energy in the room was describable!

My bum literally felt bruised as soon as I got off the bike and then it was back to the hall for simulated competition training.  Basically that means a ‘pretend’ tournament.  The room was set up in competition style with the judges chairs and the competitors names were posted.

I was called up to do patterns against a women who in the adult division.  I did my 2nd degree pattern of choice.  My legs still felt like jello after the hard hour of spinning so my kicks certainly weren’t their best but we were all feeling the same way. 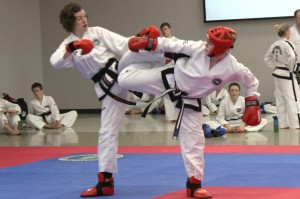 We watched some videos of previous 2010 European World Cup sparring and pattern matches.  Our coaches pointed out the good things that were done and they showed us what the caliber of competitors is going to be for us.  It was a bit intimidating but I’m still really excited.

At the end of training  the coaches each gave a pep talk and prepared us more for what to expect in New Zealand.  They also chose Mr. LeGrow and Ms. Chelsea Stone (from Regina) to be the two national team captains so if we have any concerns or questions we can always go to them for advice.  They were chosen since they’ve both had so much experience competing at World Championships.  It really hit me today just how soon the competition is.  I won’t see most of these people again until we are actually in New Zealand!  I almost don’t want this whole process to come to an end since it’s been so much fun with all the training and build up.

I’ll have a good sleep tonight and then get back at it again tomorrow with the few people that stayed in town.  I hope everyone has a safe flight home!  See you soon.