This is the day that I’ve been waiting for so many years!  I found it really hard to sleep last night.  I coughed all night and kept thinking of the day ahead.

I was one of the first to arrive at the gym so I could get warmed up.  As we drove up there was the paramedic team getting themselves set up.  Not the most comforting thought but you know that anything can happen at these events.  In some ways, it’s peace of mind knowing that there is help if needed.  The whole tournament was very well organized for things like that.

I’ve never been old enough to be at a selection process so I really wasn’t sure what to expect.  Team Sparring is very different from Individual Sparring.  I am used to only competing with competitors in my own weight division.  They do it that way to make it more fair and safe for everyone.  Today was going to be different.

For Team Sparring each country selects their top 5 competitors and 1 spare to make a team (weight divisions don’t count).  Teams compete against each other and try to figure out who is going to be the best match for their opponents. 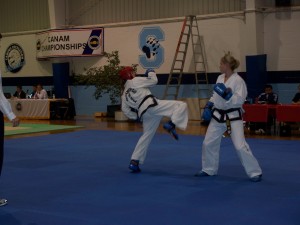 The officials invited 5 girls from the junior girls to spar each other to see who they wanted on the team.  It was weird for me to compete against micro-weights and all the other divisions since I am a hyper weight.  It’s hard to measure your body distances with the height and size differences and the micro-weights tend to be quicker and come in closer which makes it harder for me to use my powerful big kicks.

Normally sparring rounds are 2 – 2 minute rounds which gives me lots of time to read my opponent but today each opponent was only 1 -2 minute round so it really made you work hard fast.  You  had to show the judges your stuff in a hurry and prove you were worthy to be on the team.

The atmosphere was so different from tournaments.  There were three large rings and you weren’t allowed any coaching from the side lines or from your coach so it was quiet which made it a bit more stressful.  Since this was by invitation you knew it was the best of the best from all across Canada.  I had to think back to all the sports psychology that I learned from Master Lan last month and put it to good use.  ‘Today Is My Day!’  🙂

After all the men, junior boys, women and junior girl divisions did their rounds we all lined up and waited for the judges decisions.  The official final teams will be decided at the Nationals in November but today each division selected a few.  For the junior girls three girls were selected for the team and then they will choose the remainder two plus the spare at Nationals.  I can’t tell you how excited I was when my name was called for part of the team. One of the other girls was a 16 year old from Quebec and the other girl was the 17 year old from Alberta.  It will be interesting to see who the final two will be. 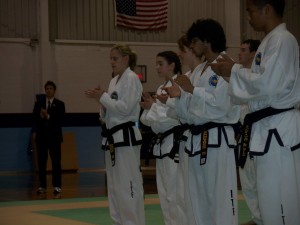 Now the real training starts! I just want to get better all the time and will do what it takes.

When I got back to Ottawa my brother and Grandpa surprised me with a delicious spaghetti dinner and cake with ‘Congratulations’ written on it.  It was so thoughtful of them.  I’m so lucky to have so much support from my entire family.

3 thoughts on “Pre-Selections for the National Sparring Team”