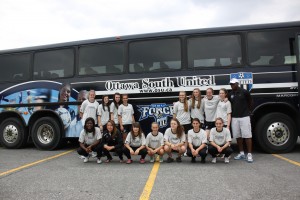 We traveled in style to Oshawa this weekend on the OSU soccer club team bus.  It was our two opening games of the season.  We were all excited to see how we compared to the other teams that have been playing at the OYSL level before.  The weather was freezing cold and it never stopped raining so the soccer was a bit sloppy compared to better conditions but at least it’s the same disadvantage for both teams.

We lost our first game 2-1 but we put up a good fight and it was a chance to get the nervous gitters out.  I was happy that I scored the first goal of the season.  Since I play defense I don’t get many opportunities to score so I get very excited when I do 🙂

We won our second game 3-0 and our team played really well together.  I hardly have a voice left after talking so much on the field.  I had to yell since the rain was so loud.

It was fun staying at the Durham residence since there were so many other teams staying there from all over Ontario.  It was also a good chance for some team bonding.