The Eastern Canadian Taekwon-Do tournament is two weeks away.  I am really happy that so many coloured belts have registered to compete.    Tournaments get so much more exciting when there are a lot of competitors and coloured belts need to compete as well in order to eventually be better black belts.  You always want new people coming up the ranks and it shouldn’t only be about the black belts.

It can be very intimidating to compete if you’re not used to it.  I want to help build confidence in as many coloured belts as possible in the next two weeks.

Since it’s the long weekend I have lots of time.  Today I spend a couple hours with a very special student.  Cameron is special since he and his family have always supported me in my training and competitions even though he trains at another school than I do.  He is very quiet and shy so I wanted to spend some one-on-one time to help prepare him mentally.  He has an amazing instructor so I certainly wasn’t there to contradict anything that she has taught him.  I just think that sometimes it’s nice to get a little extra attention to help build confidence.  I know how much I used to appreciate it when the teenagers helped me when I was his age.   Everyone is so worried about making mistakes or forgetting the patterns in front of everyone.  I explained that everyone has done that at some point or another and if the people watching don’t practice TKD they wouldn’t realize it anyway 🙂   Most kids are also really worried about getting hurt in the sparring.  They have to realize that there is the center referee to make sure the contact is under control.  Sometimes just talking about what their own goals for the tournament are can be very helpful so it’s not only about winning a medal or not. 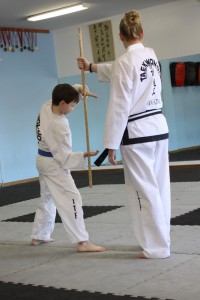 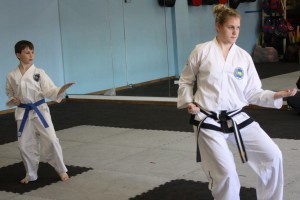 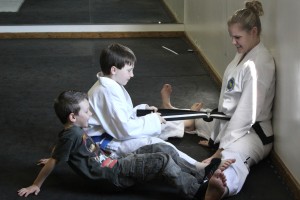 We went over every movement in his pattern and his mom videotaped it so they could review it on their own.  There are so many things to remember.  I enjoyed my time with him and I hope he did too.  I really just want him to do his personal best and have fun at the tournament.  It’s such a great place to make friends.