As you probably know by my Mom’s previous message, I am the Junior World Champion for patterns and the silver medalist for sparring.  I still have two events left in a couple days.

It’s funny, this particular blog is the hardest one for me to write since there really aren’t any words to express or describe how I really feel.  My mind is still reliving it all and I can’t seem to put in on paper.  I just know that it’s amazing.

I’ve visualized standing on the podium so many times that it just felt right and comfortable.  It’s just the way I expected it to be and yet it’s still a shock at the same time. When I was watching the high level of skill I knew it wasn’t going to be easy and I really had to leave it all on the floor.

I have so many highlights of the day….

One of the first people I saw when I walked into the arena was Master Lan.  Master Lan is the German coach and he came up and gave me a big hug.  I trained with him in Ottawa last spring and we’ve kept in touch by emails. Seeing him here was the perfect way to start the competition!  I spoke with Master Lan on the phone a few weeks ago while he was still in Germany and he was asking how my training was going.  It was an awesome phone call.  He always has such great words of wisdom.  I loved looking up between my sparring matches and he was there watching and he gave me some more good advice.

Seeing David Kerr from Brazil was also very special.  I trained with him in Ottawa last summer and he gave a great sparring seminar.  He is so skilled and nice. It was comforting being in a room with so many amazing people that I admire. I also wanted to show him that I learned a lot from him.

It was amazing having my parents and brother here with me.  They are always so supportive and this was for them as much as it was for me.  We’re all in it together.

The cheering in the arena was wild… blow horns, drums, clackers, whistles and screaming fans. Just imagine how loud the cheering can get for a boxing match or a UFC fight…. now multiply that by 6 since there were six rings going at all times plus another ring for power breaking and special techniques.  The fans were just as competitive with their cheering as they were with their events. Argentina, New Zealand, Australia and Poland are so passionate about their teams.

Competitors are separated into a ‘holding’ room to warm up.  There are video cameras in that rooms so you see what your competitors are doing.  Right before it’s your turn a marshal escorts you to the ring.   No spectators were anywhere near the ground floor.  The coaches completely take over and are there for you.  At one point I had to change from my red sparring gear to my blue gear quickly.  Suddenly I had 4 coaches around me putting my gear on me.  I felt like a race car in the pit getting my tires changed :-).

I was super proud of my sparring since I really didn’t know how hard it was going to be.  At first I was just so happy to make it into the medal rounds. I knew it would be hard to beat the girl from New Zealand being on home turf.  After each round I wanted that gold more and more.  In my final round I sparred with the previous world champion from Argentina and I knew there was no way she was going to give up her title without a really strong fight.  I know I wouldn’t if I was her.  I had nothing to lose and she had everything to lose.  I did everything I could.  Mr. Hiltz was coaching me the whole time.  All the other coaches ended up around the ring telling me what to do as well. I certainly didn’t feel alone. I lost in the last few seconds but I felt proud that I gave it all I had.  I had a nice talk with her after and we both really enjoyed sparring each other.  She will be in the adult division for the next worlds. 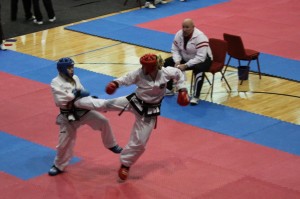 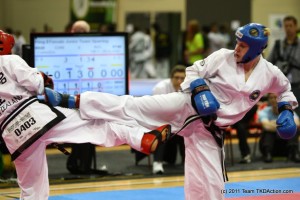 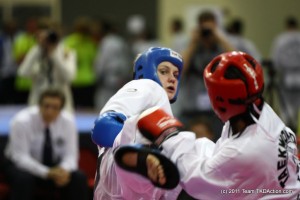 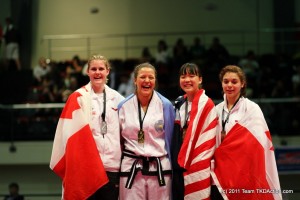 I will probably always wonder what could have happened if I had done the power breaking event.  At the time it was the only thing that made sense to me. I didn’t like hearing my name being called on the PA to go to the event.  I felt pressure since everyone wanted me to compete in it for the chance of another medal.  I might have been able to place but I also know how much damage can be done if you kick or strike the board incorrectly and I just didn’t want to take that chance right before patterns.  If I had hurt myself by doing it then I would never forgive myself for ruining patterns.  I was thinking that I would be letting Ms. Trigger down since she was so kind to me and coached for that event on her own time.  At least I will get to compete in the Team Power Breaking.  Thank you again Ms. Trigger and I hope you don’t feel like you wasted time on me.

It’s funny though how when I do my patterns I am so focused that I don’t hear anything except my own breath and the words from my coach.  Mr. Tran kept saying ‘Good Kayla, explode with every movement’.   I just ‘free’ my mind and shut everything else out. 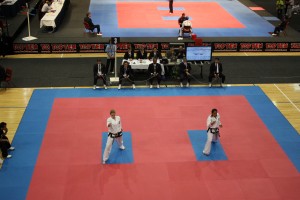 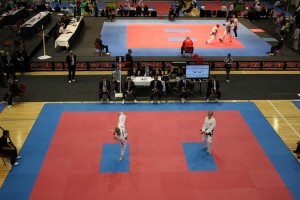 I was so happy with my patterns.  I was actually smiling since I was having so much fun. I wasn’t nervous at all.  I felt strong and crisp as soon as I started.  My legs were shaky after all the tough sparring but as soon they called my name all the nerves and pain went away.  I said to myself ‘I own this ring’.  This is what I came to do and it felt awesome.  I just wanted to have more rounds!

It’s funny though how when I do my patterns I am so focused that I don’t hear anything except my own breath and the words from my coach.  Mr. Tran kept saying ‘Good Kayla, explode with every movement’.   I just ‘free’ my mind and shut everything else out.

Canada has the best group of coaches that you could ask for.  Mr. Tran, Mr. Parent, Mr. McKenzie, and Mr. Hiltz all have their specialties and ways of coaching and they all work together so you hear what YOU need to hear.  They were running around making sure everyone was covered. It’s the first tournament that I haven’t had my parents right there on the floor.

I loved having my team mates around all day.  I have especially liked hanging out with Stephanie Boivin.  She competed and did very well and is proud of her performances.  She has been so supportive and helpful since this is her second World Championship. 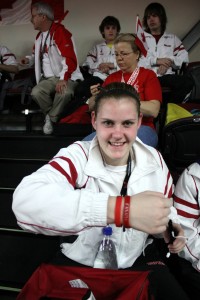 When I had to take off my ‘special bracelet’ she held on it for me.  I’ve only taken it during the patterns. I wore it under my gloves in sparring.  Everyone was so supportive of each other no matter how they did since we all understood what each of us was going through.  The adult competitors and captains (Mr. LeGrow and Chelsea Stone) really did an amazing job helping us ‘rookies’ out and got everyone warmed up and gave great pep talks.  You can only learn from those who have gone through it.

I had the bonus of having my own coach Mr. LeGrow there with me as well in the ‘holding’ room.  He wasn’t allowed out on the floor since he is also a competitor but he helped me warm up and I know he was cheering for me.  When I finished both events I ended up crying out of relief/happiness in his big bear hug. He was the first person I saw when I left the floor.  I think he felt the same excitement as I did.  I know how excited I get when my students do well so I know he was feeling proud too. 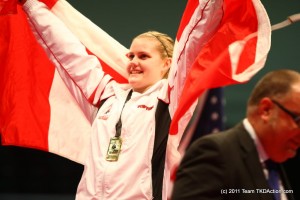 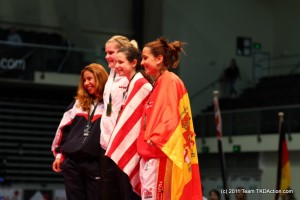 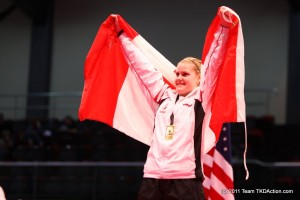 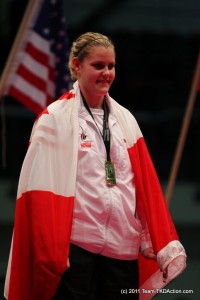 Standing on the podium and being announced as World Champion is indescribable!

Thanks so much everyone for the all the emails, comments on my posts and even phone calls.  It’s amazing how some competitors from other countries have asked me about my blog and say that they have been following it.  Very cool!