OFSAA Track and Field is an annual meet for the top 24 high school athletes in every event for all of Ontario.  Apparently it’s the most prestigious and largest high school event in North America.

As I prepared myself for OFSSA I couldn’t help but notice that I kept comparing track to TKD since they are both individual events and the preparation is very similar.  People travel as a team yet they are competing against each other in many cases but they are also supportive of each other.

The one biggest difference is that in T & F  it’s all about your Personal Best.  Since there is either a distance measurement, a time speed or a height measurement it’s very easy to see if you are improving.  With hundreds of people competing you know that there are only a select few that actually make it to the podium so you wonder why so many people would put in all the time and training.  I watched people who placed way down on the list get so excited.  It wasn’t until I realized that they were excited about breaking their own personal best.  The challenge in track and field is to keep getting faster, further and higher.  I really liked the whole concept.

With Taekwon-do it’s very different.  Only the first three places count and nothing after that is recorded so it’s very hard to measure any improvement.  You know yourself if you’ve performed well but it’s not as easy to judge as a measurement or stop watch.  When you’re competing in TKD  it’s about being able to beat anyone who you are against on that day in either sparring or patterns.  The point system is for that one time only since every match is different.  For that reason in TKD there is more pressure to perform or you lose and start all over the next competition.  It’s also more intense since not only is there the win or lose situation, but also the risk of getting seriously injured in sparring at the International Level.  One second of losing concentration and/or focus and you could be knocked out or badly hurt.  I do appreciate the risks of the T & F events as well.  The Pole Vaulting looked really scary to me and so did the hurdles and steeplechase.

I’m used to doing my own warm up, getting in the zone, and staying focussed for TKD but I was a bit lost in the T & F.  If was so funny whenever I would try to visualize the different steps in the throws, my TKD patterns kept popping up in my head.  Visualizing patterns and sparring combinations is like breathing to me since I’ve done it for so many years. T & F is a whole new thing for me.

The night before I went to Sudbury a coach from the Lions Track Team spent an hour with me and that really helped to refresh all the different things to focus on. It was the first ‘real’ track practice that I’ve ever been to other than with the school and I was so intrigued by it.  I instantly felt at home even though I was with all these athletes that train with the club all year long.  It also made me realize what I was going to be up against in at OFSAA.  I really wished I had gone and trained with them months earlier so I would be more prepared but hey, you have to start somewhere.

My first event was shot put.  I wasn’t nervous at all.  Other people around me were freaking out with nerves which made me feel really bad for them. That is when I realized all my other experience was an advantage.  I wasn’t nervous about competing in front of a lot of people but I was nervous about my knee.  Last week I sprained my MCL and overextended my knee at soccer and it was still very sore.  Fortunately the first aid team taped it up very well and that helped keep it stable but it was certainly in the back of my mind. 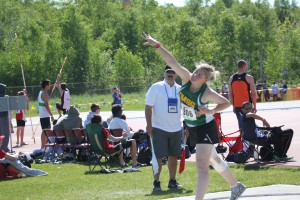 I threw my personal best for competition and was pleased with a bronze medal.  I was happy that the top three placers were pretty close when you look at all the distances that were thrown that day.  It could have gone any way at any time.  The three of us each took turns in the lead at some point or another.  I realized all you needed was one good throw and that’s it. 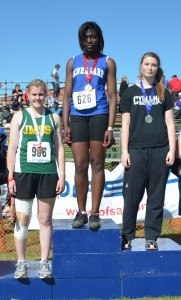 Back at the hotel I really enjoyed getting to know Shelani better.  She is a grade older and although we’ve come across each other in different sports over the years we really didn’t know each other that well.  It’s amazing how similar we are.  We also shared a room with two other girls from another school.  I normally travel with my parents for competition so this was another new experience for me and I really like it.
Day two and it was off for Discus.  Discus is my least consistent event since there is so much to learn at once.  I kept going over all the steps in my head that I was taught.  Believe me, it’s harder than it looks!  My first throw went really well and it was my personal best in competition.   As I spun around I could feel pressure in my knee so that got me scared.  For my second and third throw I was guarding my knee so the throws were not as far.  I had to make a quick decision.  Throw through the pain (I know I could have done that since I’m used to competing injured) or be happy with that throw, stay safe and protect my knee for the rest of the summer for soccer. I kept thinking of what the doctor said the day before I came about not stressing the knee too much and not to play soccer for a while so I obviously listened to him.  I will never know how far I could have thrown with more throws.  I was 2cm away from making the finals and ended up in 9th place for the province.  I started in 12th place and moved up three spots so that is at least in the right direction 🙂
As I mentioned in my last post, I forfeited my Javelin event on the third day to come back to Ottawa for a soccer game.  Well, with my knee the way it is I knew I couldn’t play so I stayed and watched the Javelin event.  To be honest, it was killing me to watch.  It’s my favorite throwing event.  I will never know how I would have placed that day but I know with my previous measurements I would have had a really good chance of placing in the medals.
It was so cool seeing all the different events and I was so impressed with the quality of the athletes. 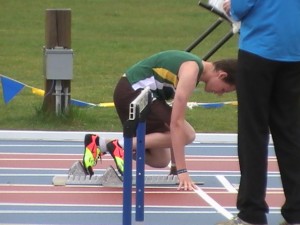 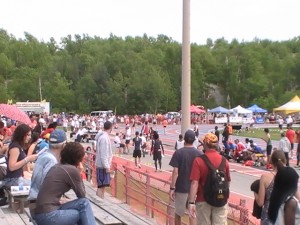 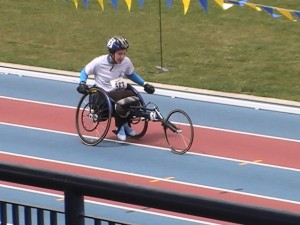 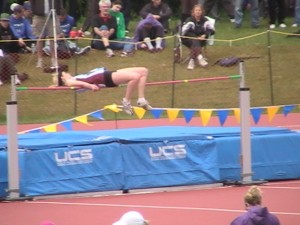 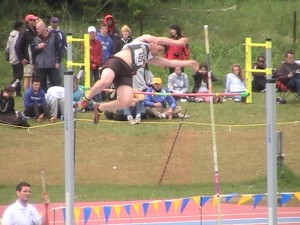 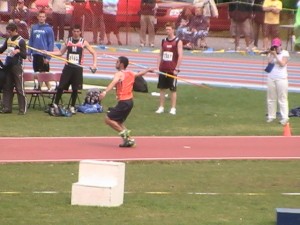 The whole experience was awesome and one that I will always remember.  I think it’s so important to try new sports and challenge yourself.  There are so many opportunities out there and unless you try them at a young age, you will never be given the chance again.  I really want to qualify again next year so I can go back injury free and with a whole lot more training to see what I can do.  I also felt really good about being able to represent my high school with Shelani and Bryson.  We were all really pleased with how it went and we had a great time.  Thanks for all the teachers and coaches that helped us out along the way.

1 thought on “My Awesome OFSAA Track and Field Experience”