While I was in Halifax at MacKenzie TKD for the week I also gave a three hour sparring seminar.  This was another dream come true for me.  I would love to spend a few years travelling the world learning from Masters and Grandmasters and then sharing what I’ve learned. I’ve been given so much knowledge from my Instructor Mr. LeGrow while he also  provides opportunities to learn from his mentors from all around the world. 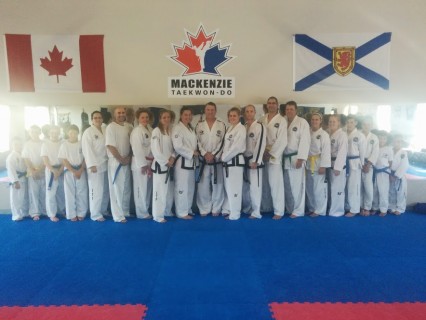 This was an interesting group of people to give a seminar to since there was a range from adult and junior white belts right up to 4th degree black belts who have competed several times at the World Championships.  I had to come up with drills that everyone could do and benefit from.

In the past 2 years, I have developed a sparring style for myself by adopting different drills and concepts and taking my own spin on them.  During the seminar, I stressed the fact that its so important to find what works best for you because we are all different in size, flexibility, coordination and in ability!

What I taught during the seminar was the concept of movement and counters that I’ve learned from Master Suarez and Mr. LeGrow. I have adapted the concepts and drills to what resonates with me best and what has worked for me in matches during he past two years. I broke the training up into 3 main parts but the focus was always on different ways to counter.

The theme was: “They can’t hit you if you’re not there.” 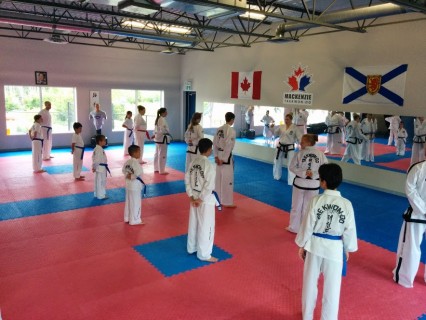 I started with the techniques and kicks we would be using in the counter attack, then we worked on about 6 types of footwork and finally we put them together and tried the counters out. 🙂 At the beginning, they are quite complicated but once it becomes muscle memory, it opens up so many opportunities. People seemed to really like it  and it was a challenge for them.

I could tell people were fried mentally from thinking so much! Sparring is a game of chess and tag. It’s about who can read their opponent, the way they move, their “tells”, anticipate their actions and take advantage of their weaknesses. It’s a game of creativity and confusing your opponent, keeping them guessing constantly of what your going to do. It’s about adapting to your opponent in terms of what will work against them, but still sticking to your game plan and style.  It’s a game of distance and timing; and if you can control those two things, you control the whole match. We have this Mental tool box, and we keep our techniques, counters, attacks, experiences and drills in it. The more tools you have, the easier it is to adapt. That’s why I love sparring! There is so much to it and the part I love the most is that everyone views it completely different and spars differently.

While I was at MacKenzie TKD I also gave 5 people private one-one-one training sessions.  I found it so satisfying since these athletes are all going to Jamaica next month to compete at the World Cup or Italy next year for the World Championships.

Good luck to ALL those going to Jamaica this week!!!! I wish you all the best and I will watching for updates. 🙂