I train with Mr. LeGrow at Blackburn TKD but Ms. Trigger from Triggers TKD has been very good to me by helping me with Power Breaking training and just overall support during the last year.

As soon as my soccer game was over I rushed to the dojang.  I felt bad that I missed the Theory and the Pattern portion of the test  but I was asked to spar with the students.  It’s always hard to spar in a test since you want to push them so they feel good about their test and have the opportunity to show their skill but you also don’t want to hurt them and every school has different levels of intensity.  I’ve never sparred with these guys so I didn’t know how far to push them. 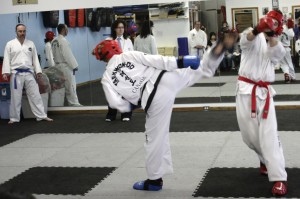 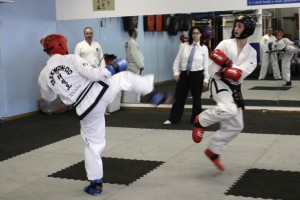 After the sparring there was lots of boards to break for the test.  There are several techniques that are used to break the boards.  I was really impressed with how well everyone did. It can be very intimidating breaking boards in ways that you’ve never done before but they were all up for the challenge and overcame their fears.

As each person was promoted Ms. Trigger asked them to tell everyone what they learned about themselves during the test.  I was so touched by all of the comments.  They were all so real, inspiring, motivating and sincere.  There were comments like:

‘I’ve proved that perseverance does pay off.  I’ve been working towards my black belt for 10 years’

‘I’ve learned that it’s not luck, but how much you want it.

‘I’ve learned that I can push myself to do more even when I’m physically really hurt.’

“I’ve learned that you have to get out of your comfort zone to improve.’

These were just a few types of comments that were made but they were all very similar no matter how old or young the students were.  This is just another reason why Taekwon-do is so important to me. I love being surrounded by positive people that are all working hard towards a goal. Being there yesterday reminded me of just how special it is getting your black belt. How big of an accomplishment it is. I have wonderful memories of my first class as a black belt. I don’t think I have worked so hard in my life.

After the test was finished we all went out and had a nice celebration dinner.  Congratulations to everyone!!!