I was scheduled to spar in the first time slot so I took a cab to the venue.  I didn’t want to be worried if the bus was going to be late.  I know that I like to be there early to get a good warm up in and to settle any nerves.  This is when I just put my head phones on and escape with my favourite music.  I like to listen to upbeat music before I spar and music that makes me smile.

I asked another competitor (Mike Blom) in the male division to come with me to help me warm up since he wasn’t competing until the next day.  It’s taken me years to figure out how much or how little to warm up.  There is such a fine line between over warming up and going in cold. The hard part of competition is not knowing exactly what time you are competing.  I always have my grandma’s rolling pin that she used to roll her pie crust with me to roll out the muscles in my legs.  It works really well since it is even pressure.

Fight time –Russia was my first match and she was one of the hardest matches I had. She was taller than me and she was solid and very strong.  I could see on the score board that I was tied with her at the end of the first round so I had to figure something out quickly.  I didn’t come to lose!  Fortunately my instructor Mr. LeGrow and I had worked really hard over the last two years on different strategies just for times like this.  My footwork kept her from scoring and I started to pick apart her style and outsmart her with the help of my coach, Mr. Tran and capitalized on my opportunities . I was so relieved to get that first win under my belt. I get more comfortable and relaxed the more matches I have, so starting with a hard match was probably a great thing for me to turn the switch on right away, and to realize the talent in the division. I knew I would have to you my experience, and be smarter than the other girls to win. 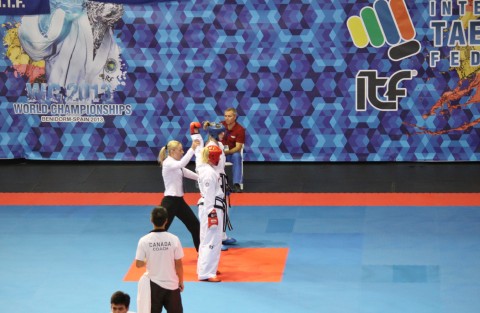 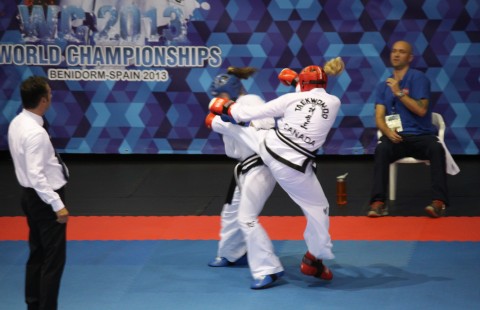 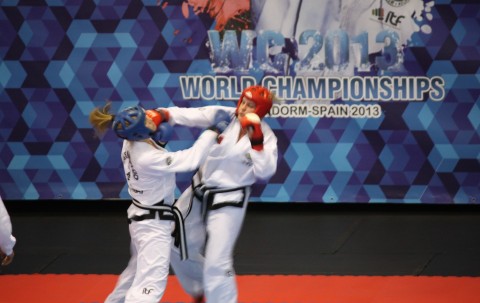 I’m sure my fights were boring to watch but I have learned that you can be a very flashy fighter but still lose the match.  It’s all about being strategic, smart and scoring the points.  I’m a very patient and defensive fighter when necessary can capitalize on the opportunities.

In the semi-finals against USA I kicked the girls elbow by accident and it REALLY hurt.  Between rounds I took a look at it and my whole ankle was already swelling up quickly but I had to forget about it.

After winning my preliminary matches I was so excited for the finals against Slovenia. The Gold in sparring was what I had been so hungry for.  I lost the gold back in New Zealand in the last 5 seconds and there was no way I wanted that to happen again.  This time, the gold was mine! As the round went on and on, I could feel myself closer and closer to gold, to victory and to satisfaction. When the center referee lifted my arm as the winner, I felt such a sense of relief and ease. I was exhausted and proud. It wasn’t just about winning that day. It was the reward for all the years of travelling to different cities, provinces and even countries with my instructor and parents to learn from others.   It was about getting rid of that demon from losing in New Zealand.  I wanted to be a world champion in both sparring and patterns and it happened.