I don’t even know where to start since so much happened in just 48 hours.  My parents drove me to Laval, Quebec (2 hr drive) for some training at Eclipse Taekwon-do.  I slept the whole way there since we left very early.  When I woke up I was in a different city but I was ready to go  :).

I’ve trained with this group of students over the years but I’ve never been to their school before.  They train in a huge private high school in their gorgeous gym.  It was the first time I’ve met their head instructor,  Marie-Claude Messier.  I had heard how amazing she is, so I was excited to meet her and maybe get some tips.  I have to admit I was really intimated when she yelled out commands in french to me while I was sparring an 18 year old very skilled guy.  Once I got over my fear and was actually able to understand what she was saying, her advise was bang-on and I did what she told me to do.  Things got easier and her advice made a lot of sense and it really helped.  Thank You Mme Messier!  I am so glad that I’m in french immersion since hardly any English was spoken all weekend.  I also got some good tips from Mr. Nguyen, who invited me to spend Saturday training with him and his crew of students.

Biggest Lesson: Use my long legs to their fullest advantage.  I was getting in too close to my opponent.  As Ms. Messier said – keep a larger distance. If the opponent starts to get closer, throw my leg out and make sure I cock my knee back so I don’t get jammed.   It’s something that I always have to work on and that’s why it’s good to train with different opponents to practice it.

One of my training partners from Blackburn (Miro Mostovac, 20 years old) met us there and he spent the rest of the weekend with me and my parents.

After training for two hours we had a quick lunch and piled back into the car.  Miro and I fell asleep immediately after our hard training.  Two hours later we woke up in a small quaint town of Louiseville, Quebec.  The town was basically closed down to a huge fair and parade.   We walked into the next dojang and it was great to see all the girls that I’ve competed with.  I find it really interesting to see where everyone trains and lives.  I think it tells you a lot about the person.  The dojang was really nice with good floor mats.  Mr. Nguyen and his group of students also travelled with us from Laval to continue the training.  Mr. Richer, and Mr. Nguyen ran the training, and there were only about 12 of us.  I was happy since I’ve seen Mr. Richer coach girls (that were always against me) from the sidelines and I always respected his coaching skills.  Now he was going to be coaching me for the afternoon too 🙂  It’s amazing how so much has changed for me over the last few years and how so many doors of opportunity like this have opened.  We worked on sparring drills and then  free sparred for a while.   It was an awesome three hours.  There was music in the back ground and it really pumped the training up and made it more fun. I found the training very beneficial and and a great time. One of the things that we talked about was bringing back the fun and game aspect of sparring. People get too uptight and stressed sparring. It`s important to stay relaxed and enjoy sparring.   At the end of the training we all sat in a circle and the two instructors gave us all an individual review which was a nice personal touch.  They both said that I spar exactly like my instructor Mr. LeGrow so that was a huge compliment!!! 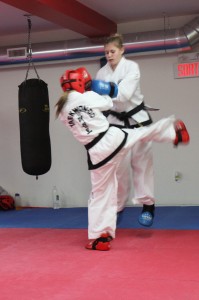 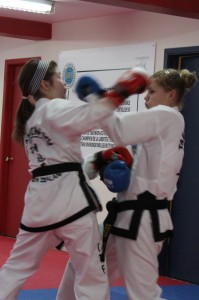 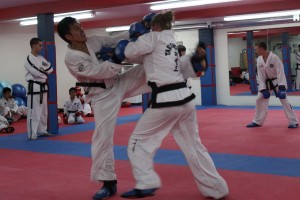 Biggest Lesson: It helps if you make the sparring match more entertaining and enjoyable for the judges.  The coaches were making us verbally get excited when we got a point. They got us to call out and make it obvious that you scored a point. There`s a lot of acting in the sparring match. If you can make the judges think twice about if you got a point even if you clearly didn’t, it could win you the fight. It started off really awkward but then it became hilarious.

After the training, Miro and I were starving but we wanted to walk around the fair for a little bit since it was right outside the door of the dojang.  It was a nice way to end the visit in that town.  The french fries smelt so good but we knew it wouldn’t be a good choice so we just kept going 🙂

The village was so beautiful with all the old buildings and everyone seemed to know each other.  We were having a lot of fun but we had to find something to eat and then head off for another long  2 hour drive to Quebec City.

Once again I fell asleep and woke up in a different city 🙂  The day never seemed to end.   We ended up at the Hotel of First Nations to meet up with my Instructor Mr. LeGrow and Mr. Lim.  They had been training with Grand Master Hector Marano all afternoon for a special 3rd degree and up session.  The hotel was the coolest building I’ve ever seen!  It was full of traditional native artifacts but put in a really modern building.

Sunday was another exciting day.  Grand Master Hector Marano was visiting from Argentina to give a seminar on patterns in memory of Grand Master Tran Trieu Quan who was tragically killed in the Haiti earthquake last February.

The day went by quickly because I was learning so much. We would do one pattern all together, and then Grand Master Marano would take a couple people to come and do their patter step by step in front of everyone. He completely dissected each movement. It was important to hear what he had to say so I knew that I was doing the patterns correctly. I found it crazy how much he knew and how much the things he was saying made sense. We also did some self defense which was really fun. I got to work with one of my buddies that I don’t see that often.  All these events, including past seminars with Master Lan and Mr. Kerr have helped me prepare for Nationals and I’m getting really excited about it.