I had yesterday off from competing since it was competition day for all the adults. It was amazing to watch knowing that I could completely relax.  The atmosphere was just as loud today and it was fun being up in the stands cheering on my team mates.  The men’s sparring gets so intense. I was so proud of Mr. LeGrow who won a bronze medal in sparring.  I’ve never seen him spar better.

The women’s Team Canada took over in patterns.  We received three medals for patterns.  I was completely over the top when Isabelle Bond won the World Champion Title for 4th degree patterns.  I could watch her do patterns all day.  She has so much control of her legs. Looks good on Canada.  Considering 3 of the girls who are on the Team Patterns placed in medals it will be a great start for their team division on Sunday.

Canada also won another bronze medal for women’s sparring, and Mr. LeGrow won a bronze medal too in sparring. I think it’s the best I’ve seen him spar. I was proud to tell people that he was my instructor.

It’s so hard to watch your friends do their very best and get eliminated on their first round of either patterns or sparring.  The competition is so good that it must be really hard for the judges.  At this level all the patterns are excellent so they are looking for the tiniest fault to determine their winner. It can be the tiniest thing that can determine their score. My training buddy Miro did two awesome patterns.  I really don’t know why they didn’t vote for him.  Even after looking at the video there is nothing that jumps out at us.  It can be very subjective which is the hard part.  Everyone is just really good here!!! 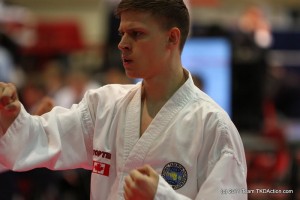 In sparring you pray that all the judges see your points.  So many times you can be scoring but you might have your back to the judge and they don’t see it.  You really have to make it obvious so there is no question of it.

Everyone just feels honoured to be here to compete.  Just making the National team is a huge deal and I hope everyone feels proud of they performed.

Today is a ‘free’ day but I am going back to the arena to train.  I want to work on some more sparring and power breaking techniques.  It’s weird that there is almost more pressure on the team events since my performance also affects the chance of a medal for the whole team.  We all win or lose together.  It’s been great to have all the team bonding time this week so that really helps.  The Canadian team is so supportive I know everyone will be fine no matter how we do.

Greg wants to go kayaking today so we will try to do that as well and we are also going to go walk up Mt. Victoria on a trail.  Gotta go.  I feel like I’m running out of time being here

Tomorrow I will be competing in Team Sparring.  Canada’s first match is against Team New Zealand.  I can only imagine how crazy the crowd is going to go for their home town.  There are 5 people on each team.  Each country has their best fighters in all weight categories and the coaches match you up with someone on the other team.  I might have to spar against a micro-weight, lightweight, heavy weight or another hyper-weight.  This is different since there is so much strategy on the coaches since they have to decide who goes up against each other.  You are only allowed to spar 1 two minute round.  The first team that has three wins is the winner.  You can see more details on the official website for the rules.

Then I also have Team Power Breaking.  Basically you get points for each break.  The team with the most points wins.

3 thoughts on “5 More Medals for Canada”