I was so honoured to be interviewed Pam Dillon from the Ottawa Living Magazine - Summer Edition. I actually met Ms. Dillon when I first started TKD at the age of 3 when her family also trained with Master Kou at Kou's TKD.  It's been years since we've seen each other so when she contacted me I was very happy. Thank you for such a nice article.  I really enjoyed meeting you in a coffee shop to talk about everything and catch up after all these years 🙂

[pdf-embedder url="http://ikicklikeagirl.com/wp-content/uploads/2015/05/OFL_Summer-2015_P55-58.pdf"]
I had the honour of being interviewed by reporter/journalist Lynda Steele and here is the link to the two page article.  Thank you Lynda for doing such a great job 🙂

Past Media Coverage and Media Mentions:
January 2015 Barrhaven Independent named Kayla the Glen Dicks 2014 Person of the Year in honour of her World Championship titles while inspiring young people in the community.  See the three page article including the front page of the paper. Click on the following three links.
BHI-0109-001 - cover page 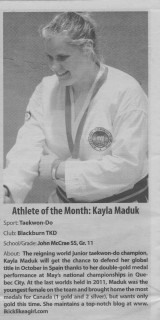 Click on the video below to watch the Rogers TV interview on Kayla's 5 step process on 'Growing Champions' that she gives in local schools, clubs and sporting events.